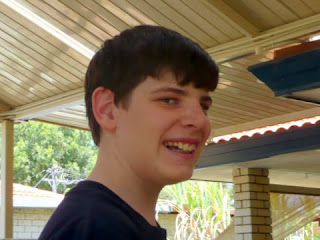 If I had a dollar for everytime a person has looked at me with a puzzled expression and eyes asking - does he want it?  I would be well on my way to paying off the mortgage. And I have days of frustration when people don't include Cameron in something, or give him something, that everyone else has or he needs, because he said No.

We live in Cameron's world and in that world there are Cameronisms, yes, in his world I get to make up words. Cameronisms are the little things that only Cameron does and all the significant people in his life understand his Cameronisms but for everyone else it is really confusing.

It can be challenging to ask Cameron a question. For example - Cameron would you like a drink? He will shake his head No. Okay, the natural assumption is that he doesn't want a drink but we have learnt after many years of living in Cameron's world that you have to question the answer. His No could be a No or it could be a Yes. Confused? I know, it gets like that around here.

There is an invisible switch inside Cameron's head that answers most questions with No. I don't know why but it does. You could ask him if he wants a lolly and he will answer - No. ?????? He loves lollies. You could ask him if he'd like to watch TV and he will answer - No. Again, ?????? He will sneak in and turn the TV on whenever he thinks I'm not watching, rarely does he not want to watch TV.

We have learnt to question any No with, now is that a No-No or a No-Yes. If you're lucky the switch flips and you get a Yes, if ýou're unlucky he will still say No whilst giving all the body language signs for Yes. It can get frustrating but we have learnt to challenge his switch and if he says No a second time then we walk away, if he really wants whatever it is you are offering the switch will flip and he will grab you, the item he wants or he will scream really loudly to let you know he is dissatisfied with your behaviour because clearly his No was a Yes.

However there are certain questions that hardly ever get a No of any kind. Cameron, would you like to watch a Wiggles DVD? To that question you get a quick and happy head shake Yes and then you have to keep up with him as he races to chose a DVD or turn on the TV. Cameron, would you like to come with me in the car?  Watch out, Cameron coming through, he will even go and get his shoes without being asked. The trouble is when you get home and he thinks he hasn't had a long enough drive - he will refuse to get out of the car.

So, if you  meet Cameron and he answers Yes to a question you can be assured that he means Yes but if he answers No, well, it could mean No or it could mean Yes. You have to use some common sense and guess. His yell will usually let you know if you got it wrong and it's really important to him. Or, look at his sad puppy dog eyes as you walk away, you can usually figure it out by then.
answering questions children communication Non verbal child parenting Special needs

Welcome to Holland.....a Follow Up and the Amsterdam International

I was given 'Welcome to Holland' when Cameron was quite young and it was the first time that I read something that spoke to me. This person knew how I was feeling, I had found a person who understood me. Years later the 'Follow Up' was circulated and once again I read my own feelings on the page. My life had progressed along with the writers and I felt comforted by the words, I was not on my own in this foreign land.   Some people will read this post and sigh because they have read these words so many times and others will read this for the first time and will probably shed a tear or two. (So what's new around here?)  Most parents of children with special needs feel an affinity with these beautifully written words. Welcome to Holland Emily Perl Kingsley c1987 by Emily Perl Kingsley. All rights reserved . I am often asked to describe the experience of raising a child with a disability - to try to help people who have not shared that unique experience to unders 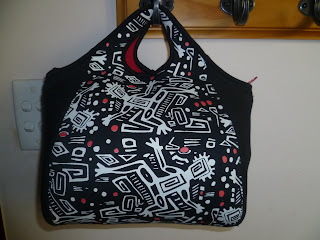 Cameron's Change Bag A few days ago I had to take Cameron to the toilet while we were in a public place. Again just like when we went to the Zoo the disabled toilets were inside the male and female toilets. I couldn't go into the male toilets so I had to take my sixteen year old son into the female toilets. I felt incredibly self conscious doing this and was relieved when nobody was around to see us when we went in but when we went to leave there was a young teenage girl washing her hands. I waited till she left and then walked Cameron through. Why are toilets set out like this? I couldn't even just walk straight into the cubicle I had to walk across all the basins to get to the disabled toilet. That then brings me to the actual toilet. As I noted later the sign for the disabled toilet did show a person in a wheelchair and that is exactly what the toilet was set up for - a person in a wheelchair. Not a carer toileting or changing a person with special needs. This 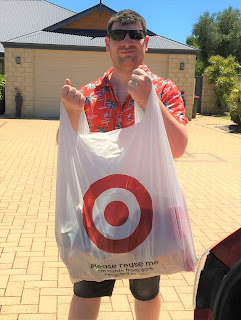 Cameron Collects - Cameron has a Business!!!

First Day - Cameron Collects We have been wanting to create an employment opportunity for Cameron for years but could never find the answers to the multitude of questions - What?  How?  Where?  When?  Then his support worker had a brilliant idea and Cameron Collects was born. Cameron Collects is a service to collect recyclable drink containers and recycle them at a  Containers for Change WA  recycle centre. Cameron has a growing list of businesses and homes that he is collecting from and all proceeds from his recycling goes to Cameron. We will always have a goal that he is saving towards and his first goal is a car.  Facebook   www.facebook.com/CameronCollects Cameron is now 25 years old. He finished school 7 years ago. For seven years he has been a tourist in his own town visiting parks and beaches and tourist locations. He's spent his days visiting shopping centres and eating lunch in food courts. He's sat in libraries to kill time and joined various disability specific group